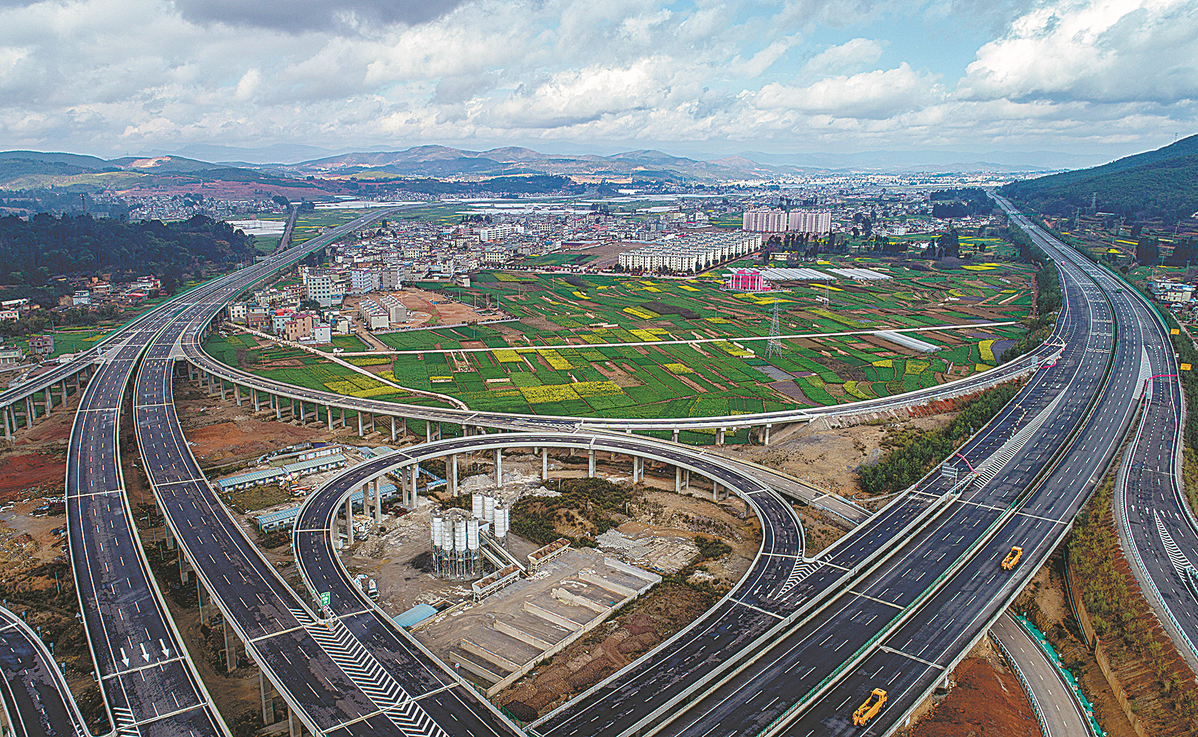 An aerial photo shows the Kunming-Chuxiong Expressway which was opened in January. [Photo/Xinhua]

As Yunnan province in Southwest China is dedicated to building itself into a trading hub facing South and Southeast Asia, its people are looking to profit.

Yan Song, 55, said she was among the first group of people to sell apples from Zhaotong, Yunnan, to Thailand in 1997.

Members of the group transported goods by sampan, a skiff commonly seen in Asia, along the Mekong River. They had to travel along the river for several days to reach the trading point. When they wanted to rest during the journey, they would tie their boats down to a stone on a shore and sleep on the vessels.

They would sell their apples and bring back fruits such as litchi for sale in Kunming, the provincial capital.

A worker sorts freshly cut flowers at a flower trade center in Lijiang, Yunnan province, in May. [Photo/Xinhua]

For the first trade, Yan made 3,800 yuan, an entire year's salary back then for the divorcee, who was taking care of her 4-year-old daughter.

Yan lost her job at a State-owned grain and oil company in Kunming among a wave of massive layoffs in China in the 1990s. She lived on monthly unemployment payments of 150 yuan and money she earned from working as a loader.

"When a woman is willing to give up her decency and challenge her physical strength to do manual labor with men, it must be because she has a baby and elderly parents depending on her, so she deserves admiration," she said.

Yan heard that in Thailand, apples are rarely planted, and just one of the fruits could be sold for as much as 50 yuan. Shocked at this knowledge, she decided to take a risk. 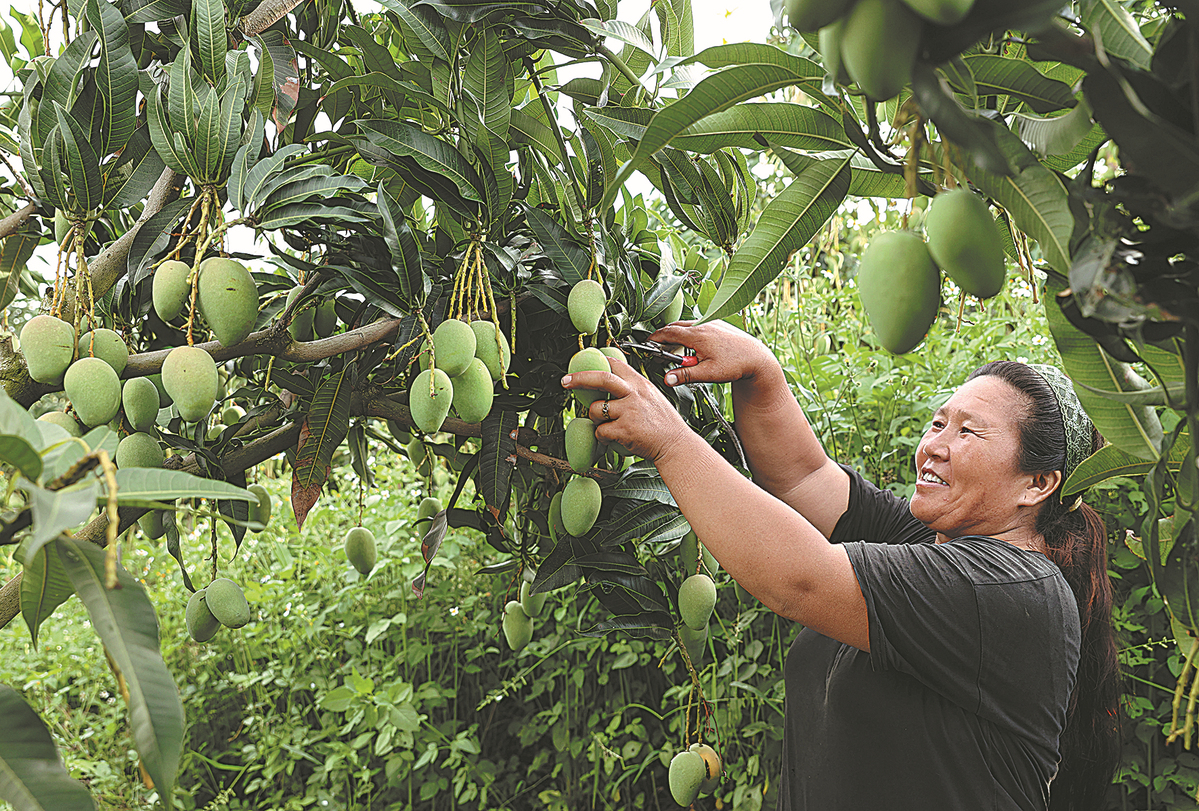 A farmer harvests mangoes at a plantation in Honghe county, Yunnan, in June. [Photo/Xinhua]

"I did so because I 100 percent believed that I could win this bet. Otherwise, I would never rise from the ashes for the rest of my life," she said.

Yan won the bet. She started an agriculture company selling garlic, peppers and ginger that has netted export contracts collectively worth about 40 million yuan ($5.9 million).

"It can be said that I have been growing along with my province's foreign trade development," she said.

Instead of collecting products from farmers individually, her company has set up its own planting bases and agricultural cooperatives. And sampans have long ceased to be necessary; she can transport goods not only using waterways but also highways and railways.

According to the provincial government, the length of its expressways now exceeds 10,000 kilometers, 3.4 times that of 2012. Domestic sections of the China-Vietnam, China-Laos and China-Myanmar international corridor highways have been opened to commercial traffic, cutting transportation times and costs.

The total import and export volume of foreign trade increased from $21 billion in 2012 to $48.7 billion last year, the government said.

Also last year, border trade accounted for about 13 percent of Yunnan's total trade volume. Mechanical and electrical products made up the lion's share of the province's exports, accounting for 36 percent of the trade volume. Agricultural products ranked No 2, at 16 percent. 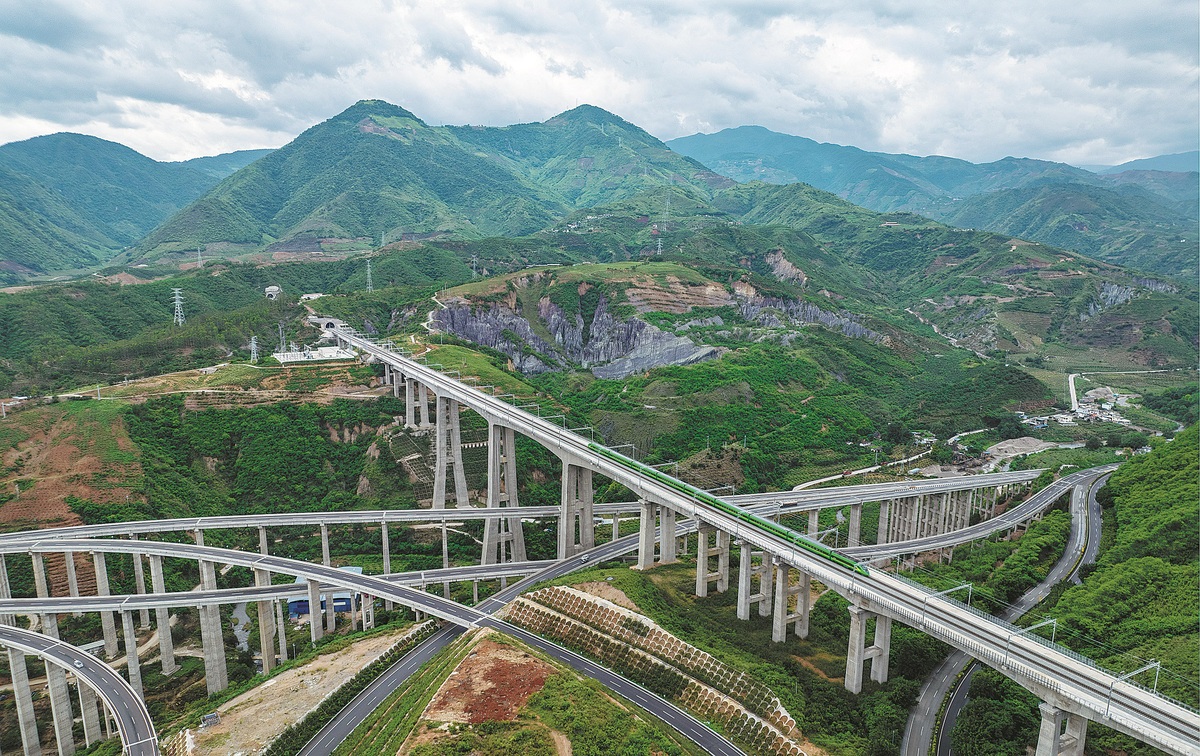 A train travels on the Nanxihe Bridge of the China-Laos Railway in Yunnan. [Photo/Xinhua]

Last year, Yunnan produced more than 16.2 billion fresh flowers, enough for every person on Earth to have two and every citizen in China to have 10, he said.

Meanwhile, the province's circle of trading partners has grown to about 200 countries. Members of the Association of Southeast Asian Nations are Yunnan's biggest trading partners, with Latin American countries second, he said.

"We will have a big trading market by seizing opportunities, making good use of transportation channels, cultivating logistics, developing industries, promoting opening up and accelerating the construction of an international hub for comprehensive transportation, energy, and digital logistics," Wang said.