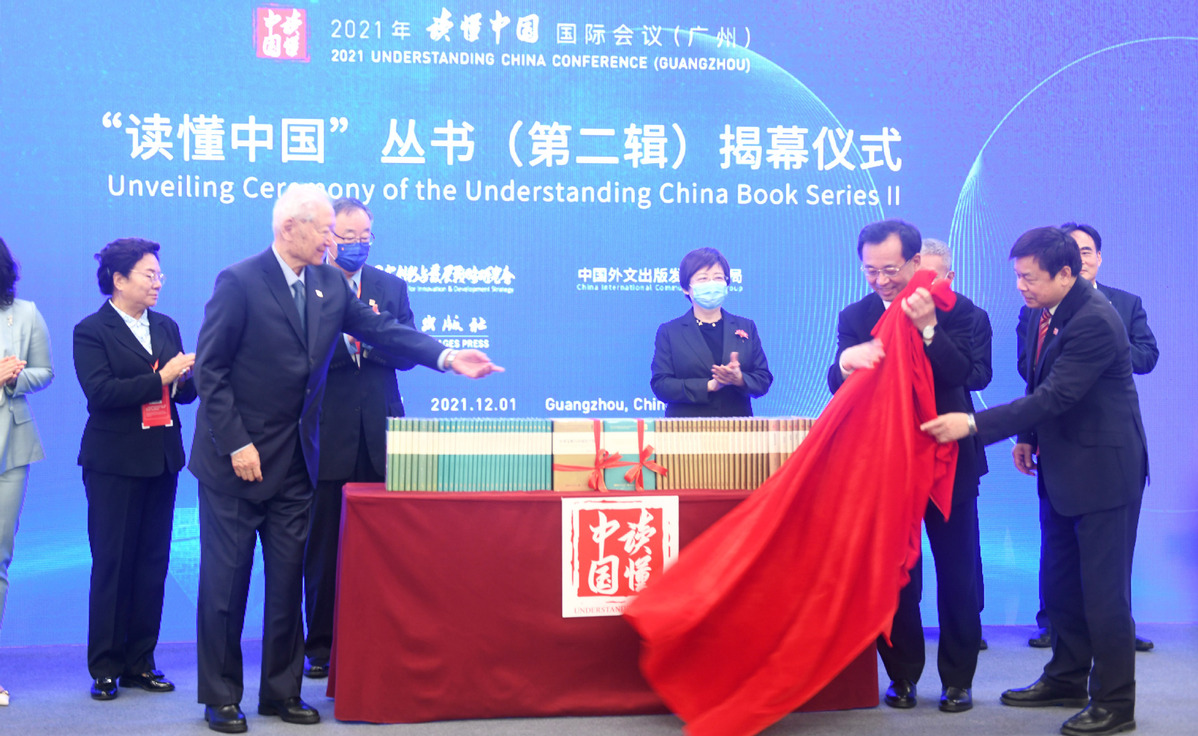 The Understanding China book series II is unveiled in Guangzhou, Guangdong province, on Dec 1, 2021. The books focus on the history and achievements of the CPC, the country's governance system, the Belt and Road Initiative, and other issues. [Photo/Xinhua]

Chinese President Xi Jinping said on Thursday that to understand China today, one must learn to understand the Communist Party of China (CPC).

Xi made the remarks when delivering a speech via video at the opening ceremony of the 2021 Understanding China Conference (Guangzhou) in Guangzhou, south China's Guangdong Province.

The world is experiencing changes unseen in a century which, compounded by the COVID-19 pandemic, have brought the world into a period of fluidity and transformation, Xi said in the speech.

It is all the more important for us to exchange views, have more interactions and cooperation, and contribute our wisdom and strengths to a joint response to global challenges at such a juncture, he noted.

"As I have pointed out, 'To understand China today, one must learn to understand the CPC'," Xi said.

Noting this year marks the 100th anniversary of the founding of the CPC, Xi said that the CPC has rallied and led the Chinese people in making unremitting efforts that have fundamentally changed the future and destiny of the Chinese people and exerted a profound impact on the course of world history over the past century.

Not long ago, the sixth plenary session of the 19th CPC Central Committee was successfully concluded with the adoption of the Resolution on the Major Achievements and Historical Experience of the Party over the Past Century, he said, adding that going forward, the CPC will draw strength from history, forge ahead for a better future, stay true to its founding mission, and rally and lead the Chinese people on a new journey toward building a modern socialist country.

The Party will always put the people first, commit to its fundamental purpose of wholeheartedly serving the people, follow a people-centered philosophy of development, promote well-rounded human development and common prosperity for all, and better meet the Chinese people's aspiration for a better life, Xi said, adding that the CPC will unswervingly follow the path of peaceful development and opening-up to the world, work for a community with a shared future for mankind, and promote humanity's common values of peace, development, fairness, justice, democracy and freedom.

"The CPC will always be a builder of world peace, a contributor to global development and a defender of the international order, and strive to make new and greater contributions to the progress of human civilization and to world peace and development," Xi said.