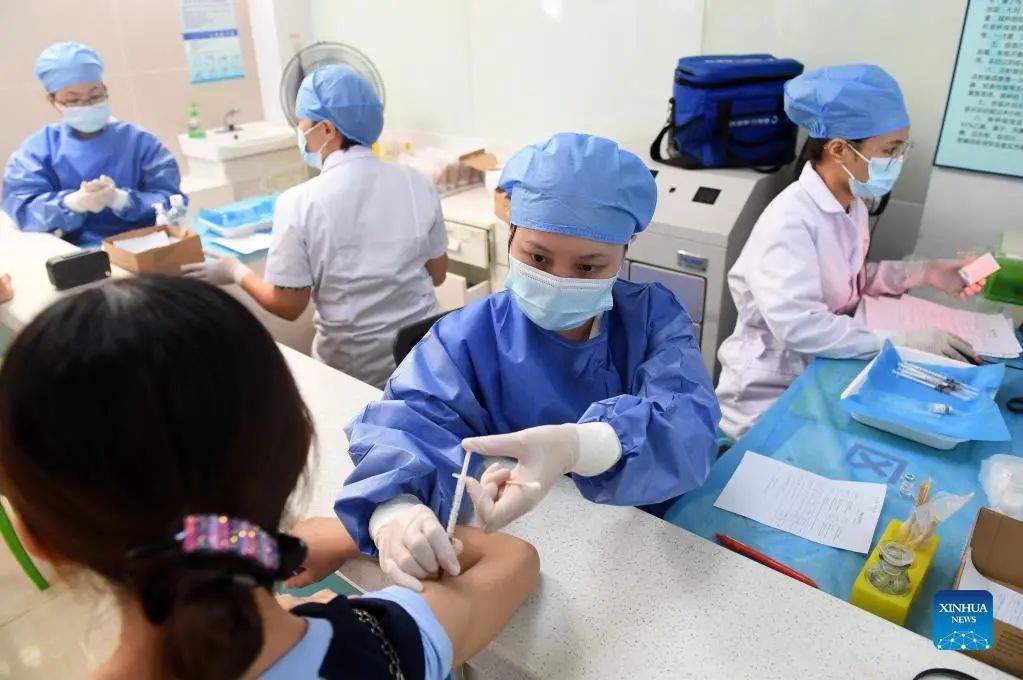 A medical worker administers a dose of COVID-19 vaccine to a citizen at a community health center in Qingxiu district of Nanning, South China's Guangxi Zhuang autonomous region, Augutst 27, 2021. (Photo/Xinhua)

Some local governments in China have begun offering COVID-19 booster shots to people over 18 who have already been vaccinated amid rising evidence supporting the ability of an additional dose to improve immunity.

The Guangxi Zhuang autonomous region said on October 9 that booster shots will be made available across the region for adults who have been fully vaccinated for at least six months.

Key groups will be prioritized during the initial stage, including people at higher risk of contracting the disease, such as workers in the cold chain, customs, transportation and health services sectors, as well as those who plan to travel abroad.

In addition, essential workers in the public service sector, such as police officers, community workers, elderly care and sanitation staff, will also be given priority to receive an extra dose, according to a notice released by Guangxi's disease control and prevention center.

It added that four types of vaccines will be deployed as booster shots. They are two Sinopharm inactivated vaccines, one created by the group's Beijing Institute of Biological Products and the other by its Wuhan Institute of Biological Products, one inactivated vaccine made by Sinovac Biotech, and an adenovirus vector vaccine from CanSino Biologics.

People intending to get an additional shot will be given the same vaccine made by the same company. If supplies of a particular vaccine run short, other vaccines of the same type but created by a different company can be used as an alternative, local authorities said.

Guangxi had fully vaccinated nearly 34.5 million people, or about 85 percent of residents above 12 years old, as of Saturday, the regional government said.

Nationwide, China had administered more than 2.22 billion doses as of October 9, according to the National Health Commission.

Since mid-September, Tianjin and several cities in the provinces of Fujian, Hainan, Guangdong, Anhui, Hubei and Heilongjiang have announced the rolling out of booster shots for targeted groups.

In Shenzhen, Guangdong, a community worker surnamed Xue told local media that she had opted for a third shot because she had frequent interactions with local residents and wanted to boost her immunity against the disease.

Zhao Hancheng, deputy head of the city's Donghu neighborhood, said staff members at a major local supermarket, as well as those working for cold chain or seafood wholesale markets, were urged to get a booster shot.

Booster shots are being adopted by an increasing number of countries as protection triggered by COVID-19 vaccine wanes after six or more months, health experts have said.

Wang Huaqing, chief expert at the Chinese Center for Disease Control and Prevention, said clinical trial results released by vaccine developers have shown a rapid rebound in the amount of neutralizing antibodies in humans following a booster shot.

"In addition to increased antibody levels, the spectrum of antibodies is also wider, suggesting that a booster shot will likely elicit stronger protection against variants," he told a briefing late last month.

A new piece of evidence was published by Chile's Health Ministry on October 7 regarding a two-dose inactivated vaccine made by Sinovac Biotech.