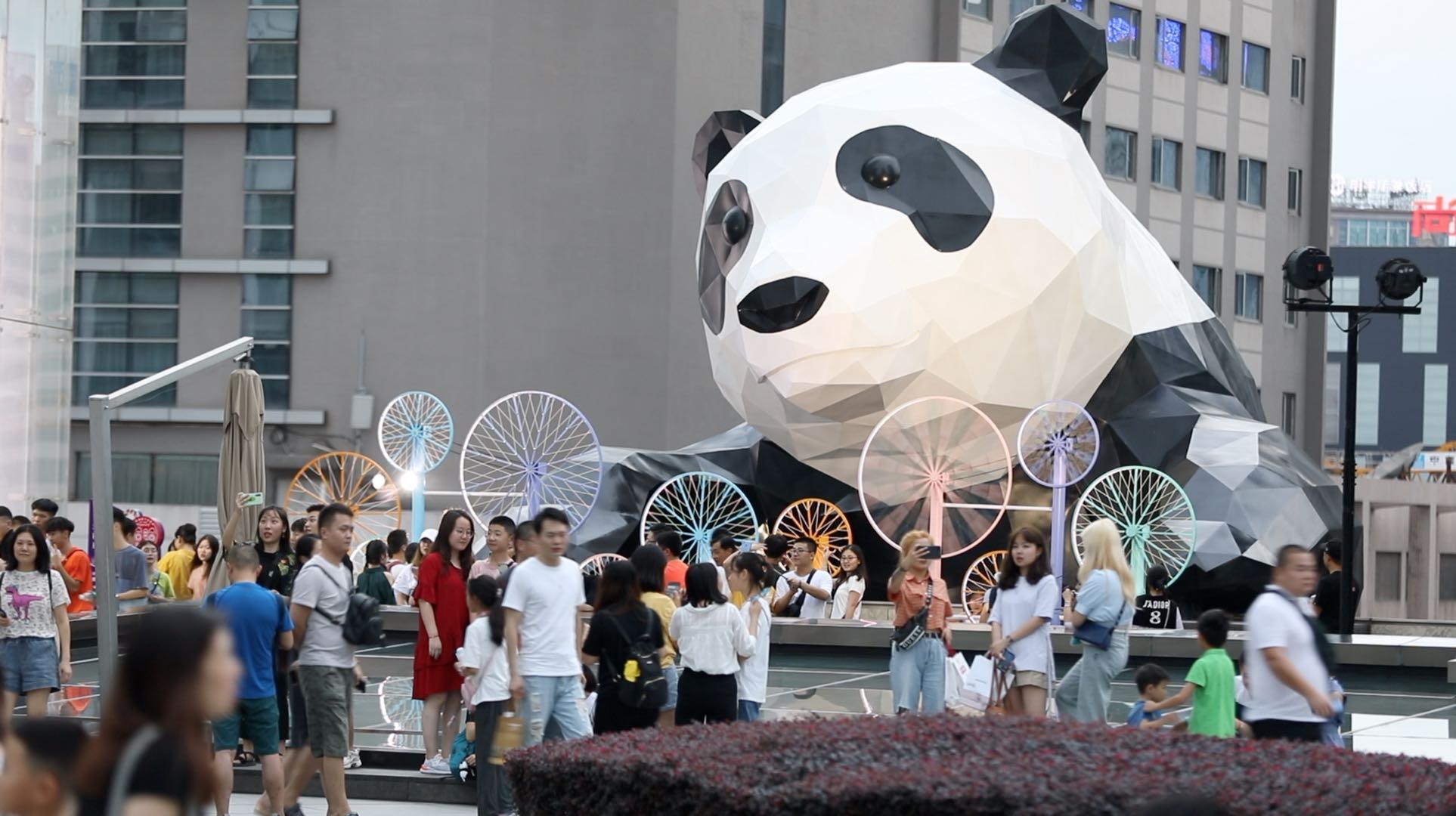 The climbing panda at the International Financial Square is one of the biggest attractions in Chengdu. （Photo/CGTN）

A Chinese national strategy to integrate Chengdu's economy with neighbor Chongqing will bring growth to the less developed western region, a CPC meeting said on Friday, as China has unveiled a "dual circulation" strategy to promote high-quality growth and tech innovation in its long-term development.

The Political Bureau of the Communist Party of China (CPC) Central Committee reviewed a plan for the construction of the Chengdu-Chongqing economic rim. Chinese President Xi Jinping, general secretary of the CPC Central Committee, presided over the meeting.

China's economy faces challenges as the world is undergoing profound changes, the meeting said. As a significant part of the "dual circulation" strategy, the Chengdu-Chongqing economic rim will bring high-quality growth for the region, widen the market and stabilize the production chain and supply chain.

The economic rim aims to make the two megacities important growth engines, innovation hubs, and desirable cities to live for the vast regions in western China, it said.

The plan also asks Chengdu and Chongqing to play a leading role in China's Belt and Road Initiative and promote economic connectivity with regional countries.

But the meeting didn't release a roadmap for the implementation of the strategy.

President Xi first raised the idea of "dual circulation" in May and later elaborated that China will rely mainly on "internal circulation" - the domestic cycle of production, distribution, and consumption - for its development, supported by innovation and upgrades of the economy.

"Dual circulation" is by no means a closed domestic loop, Xi has emphasized on different occasions, reaffirming that opening-up was a fundamental national policy.

Speaking to local people during his recent inspection in Guangdong Province, Xi said he was there to send a clear message that China will continue to walk down the road of reform and opening-up.

China must adhere to the opening-up policy in an all-round way and enhance the attractiveness of "bringing in" and the competitiveness of "going global," Xi reasserted at the event marking the 40th anniversary of the establishment of the Shenzhen Special Economic Zone (SEZ). The fog-shrouded Chongqing in winter, 2015. （Photo/Xinhua）

Gateway to the west

Chengdu, located in southwest China's Sichuan Province, is known for its China Panda Base. It has a population of 16.3 million.

In recent years, the city is prioritizing environmental protection, public space and quality of life as the agenda while seeking to protect it from the kind of urbanization and development that has stripped its character.

With a 2,000-year history, Chengdu, also an early center of Taoism, is known for preserving Chinese traditions in a way other urban centers don't have.

The city is also an important gateway to the west. It is connected to 55 overseas cities and 16 Chinese cities through the China-Europe freight trains.

Since its launch in 2013, Chengdu has seen more than 6,000 accumulative trips, according to the administrative committee of the Chengdu International Railway Port.

Goods transported through the freight trains are worth nearly 200 billion yuan (about $29 billion), it said.

The China-Europe freight train service is one of the major routes within the the Belt and Road Initiative.

Chongqing was separated from Sichuan and became China's fourth municipality under the direct jurisdiction of the central government in 1997.

The municipality, with a population of over 30 million, is one of China's fastest-growing cities. Guardian once described it as the "invisible" city and the city hidden in the fog.

In 2019, both cities ranked among the top 10 for total GDP among Chinese cities.

According to government papers, the Chengdu-Chongqing city cluster consists of 42 cities, districts, and counties in Sichuan and Chongqing, covering 185,000 square kilometers and nearly 100 million people.

Official data showed that the city cluster's overall economy has increased from 3.76 trillion yuan ($547 billion) in 2014 to nearly 6 trillion yuan in 2018.