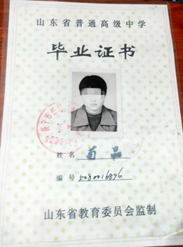 Shandong province has set up a special group to investigate cases involving people who qualified for college enrolment by illegal means like identity theft.

According to a notice released on Friday on the Shandong Provincial Commission for Discipline Inspection website, a total of 15 people have been held accountable in Gou Jing's identity theft case involving college entrance in Shandong province.